Avoid the Winter Blues by Visiting the Best Parks in Beijing

Don't stay indoors and hibernate during the cold winter months. Get out more and spend time with family outdoors with CHI's guide to the best parks in Beijing 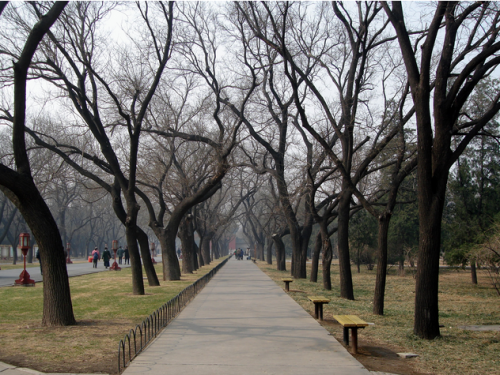 The winter months can be cruel and cause many people to retreat to their homes, but this isn't always good for your health. Getting out is not only important for physical health, but also for mental health. It's natural for people to hibernate over colder months, however, this can get you down and have a negative effect on your mood. If you're looking to get out and blow away the winter blues (with nothing too strenuous), then take a look at the best parks in Beijing.

1. Beihai Park is one of the most famous parks in Beijing and is located near the city center. It's also one of the oldest of its kind and prides itself on being well preserved with its ancient imperial gardens. There is a mixture of religious buildings and imperial palaces, so this is a good place to visit if you're interested in historical sites. With over 1,000 years of history and stories (the park was built based on traditional Chinese legend), it's packed with charm. There's a lake in the middle of the park, so if you want to walk all the way around the edge, you are guaranteed a beautiful walk with foliage and traditional buildings. There are a number of sights to see in Beihai Park, including White Dagoba in the center of the lake that is housed on a small island, and Hao Pu Creek (Haopujian) Garden, which is one of the best existing imperial gardens in China. Along with those sites, the Five-Dragon Pavilions and the Nine Dragon Screen located southwest of the park are also prominent features to see.

2. Beijing Botanical Gardens lies at the bottom of Beijing's Western Hills and is roughly 14 miles away from the city center. These gardens are adorned with flowers and sculptures, and have water features around every corner. There are many things to discover and explore in these gardens: a plant exhibition area, historical resorts, a scientific research area, and even a nature reserve to help with preservation. The gardens came about in the 1950s and grew with financial support from the government. It’s known known to be one of the largest botanical gardens in northern China, and prides itself on having over ten thousand categories of plant life. In addition, the Beijing Botanical Gardens are also home to one of Asia's biggest greenhouses. There's a considerable focus on educating the public and conducting research, especially on plants from northern China, so this is a great place to learn about plants and flora.

3. Fragrant Hill Park (Xiangshan Park) is one of Beijing's most beautiful parks in autumn, and is a favorite for getting out of the city for better air. This park is located in the Eastern parts of the Western Hills and is roughly 17 miles away from the city. Many people visit the park in autumn as red tree leaves are strewn over the mountains, which create dramatic scenery and make for a big attraction. The park has cable cars to get a better view of the landscape, which houses many old relics. There are spectacular lakes to see in both the north and south areas of the park, in addition to Fragrant Hills Temple, which is in the south hill foot close to Shuangquing Villa. The Incense Burner Peak is also another feature to see; itcan be difficult to get to as it's the highest peak in the whole park, but is equally well worth the walk.

4. Purple Bamboo Park is situated at the southern end of Baishiqiao Road, and is another of the largest parks in Beijing. This park has three connecting lakes that cover 11 of the park's 14 hectares. Purple Bamboo Park is also full of history - one of the first bridges built in the area was a favorite spot during Quingming festival in the Ming Dynasty. In addition to that, the lakes have previously served as a reservoir and provided an important water supply to the people in the area; they were even rented out as paddy fields for a short time. After that, the government reconstructed the fields into a park. There are five bridges that connect the lakes, so taking a stroll near the lakes is a great way to take in the views around the park. There is also a pavilion and winding walkways to explore, as well as plenty of bamboo and shady trees.

5. Beijing Zoo makes an ideal day out for families as it has not only a variety of animals, but also impressive gardens. The zoo is located in Xicheng District and is the oldest zoo in China. This place might house animals, but it also has a park area that is home to many flower gardens with beautiful scenery, as well as lotus pools and multiple historical sites. The zoo itself has a lot of history and goes back as far as the 18th century. After almost being completely closed, the zoo again took off in 1955 when it was renamed from the Garden of Ten Thousand Animals (Wanshengyuan) to Beijing Zoo and opened to the public. Today, the zoo has over 7,000 creatures of 600 species, including the giant panda, milu deer, golden monkeys and northeast tigers. Popular attractions consist of the largest inland aquarium in the world, Song Jiaoren Memorial Tower and Lemarck Hall, which is also used as the Chinese Botanical Science Research Base. Beijing Zoo may have animals to see, but it also prides itself on its natural and historical surroundings.

6. Temple of Heaven (Tiantan Park) is a park located in the Chongwen district. This is where emperors from the Ming Dynasty from 1368 to 1644 and the Qing Dynasty from 1644 to 1911 held the heaven worship ceremony, so is regarded as a very precious ancient Chinese site. In spite of being named after just one of the temples, there are two temples on this site: Temple of Heaven for good harvest and Temple of Earth for rain. The most attractive buildings are the Circular Mound Altar, which is located in the Southern part of the Temple of Heaven and the Imperial Vault of Heaven. The Imperial Vault of Heaven is popular as it's famous for the Three Echo Stones, the Dialogue Stone and the Echo Wall, which uses the theory of sound waves and is a noted feature of the park. In addition to that, there are other ancient Chinese buildings to see, as well as the 500-year old Nine-Dragon Cypress tree. The area itself is very peaceful and you can find people doing numerous activities, including chess, cycling and dancing.

Beijing has a lot to offer in terms of different parks. Beihai Park is the most famous and is popular due to its preserved ancient imperial gardens; Beijing Botanical Gardens offers a variety of different flowers to see and makes for a beautiful walk; Fragrant Hill Park is best to visit in autumn in order to catch the bright red leaves across the parks mountain; Purple Bamboo Park can be tranquil and relaxing with many lakes and connecting bridges; Beijing Zoo is good to visit with family and offers notable attractions, including the largest inland aquarium in the world and flower gardens; and the Temple of Heaven is a magnificent ancient Chinese site, excellent to visit for people trying to find some peace and history.