Everything You Need To Know About Street Food In China 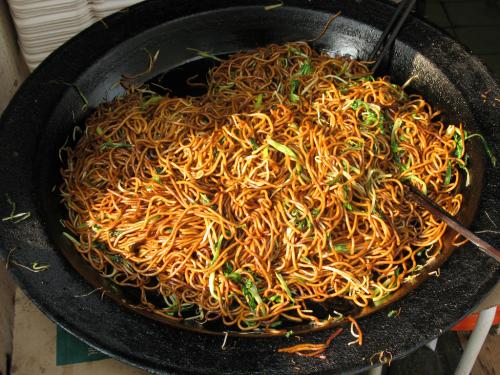 On almost every street corner in the towns, villages and cities of China, there will be at least one roadside food vendor selling snacks and other tasty treats for passers-by. The spread of migrant workers has resulted in the many flavours and tastes of China being available just about everywhere, and these canny vendors will usually pitch their stalls nearest the busiest parts of town, such as beside public transport stations, and outside shopping malls, cinemas and parks. Here, we offer a guide to some of the more common snacks and foods for sale on a street near you.

This light pastry snack is typically stuffed with shredded onion, potato, carrot, cabbage and a little sauce for flavour, and is popular for breakfast or as a mid-morning snack.

There are many different forms of bao zi - the simple steamed bread bun or dumpling with a filling. The most common type will be filled with either pork meat, meat and soup, shrimp or diced vegetables, and such is their popularity they are available in most convenience stores as well as roadside.

Arguably the most popular variety of bao zi, tang bao is the dumpling which contains soup for added flavour. While the filling generally consists of meat or shrimp, it is the soup that gives these particular dumplings their great taste. The soup is usually piping hot, so care is needed when eating these!

At first glance, these eggs - simmering in a large pot of black water - look a little revolting, but rest assured they do taste delicious. The black water is actually tea that is flavoured with soy sauce and gives the eggs a delightful kick.

A small and simple pancake that is one of the most delicious and easily recognizable of all the street foods in China, this treat is a mix of flour, lard, spring onions, scallions and butter, and is flattened into small circular shapes before being fried and then roasted.

Also known as ‘BBQ,’ kao rou is a selection of meats that are skewered and cooked over an open flame. Depending on the vendor, additional vegetables such as diced green pepper, mushroom and onion can also be added, but most tend to simply cook the meat and then coat it in spices. Vendors from the largely Muslim regions of Xinjiang and Lanzhou will typically only offer mutton kebabs, while others may give a choice of mutton, chicken, beef or pork.

Stir fried noodles are a classic street food throughout Asia and the Chinese version does not disappoint. Given the cooking time and requirement to sit down while eating, vendors will usually have a small table and chairs on hand for customers. Some may even sell bottled beer. As for the dish, a choice of thick or rice noodles is usually available, with added options of sauce, flavourings, and toppings such as egg, shallots, onion, mushroom, diced meat, tofu and shrimp.

Traditional fried rice is prepared and served in much the same style as its noodle compatriot, with the exception that rice can either be fried in a wok or baked in a clay pot. Both options are widely available in China, and most vendors offering fried rice will more often than not also sell stir fried noodles.

Commonly available from vendors that also sell bao zi, shao mai is a steamed dumpling filled with sticky rice. While the overall taste can be quite plain, some vendors do add spices or flavours such as black bean sauce to give the rice some added zest.

Literally translated as ‘stinky tofu,’ one can usually smell this street food from afar. It is regular sized cubes of tofu that have been deep fried in a brine of fermenting soy milk, vegetables, herbs and meat. Once cooked, the tofu pieces are usually coated in a sweet or spicy sauce for added flavour, and the most unusual thing about this food item is that the smellier the brine, the better the taste.

A street version of deep fried chicken which more than matches what is available from some established fast food outlets, xiang su ji consists of a selection of chicken pieces seasoned in spices and then cooked. Chicken feet may also be available from some vendors.

The quintessential street breakfast, this large pancake can easily feed two people and is a popular choice among workers and students looking for breakfast on the go. The pancake is thick, and filled with fried egg, scallions, fried meat and spicy sauce before being cut into sandwich sized pieces and served.

Meaning sour milk, this is a traditional beverage available from most food vendors. The milk is not cow’s milk but soy bean milk, and it is fermented for a number of days to ensure the flavour reaches the required level of sourness. It is served cold and is surprisingly tasty, particularly during summer.

Despite the great choice of snacks, it is worth noting that street food in China is not on a par with the hawker stands of Singapore, Malaysia and Thailand. Some Chinese vendors have questionable standards of cleanliness and have been known to pull some dirty tricks, such as using recycled cooking oil or significantly raising prices when serving an expat. The good news is that each city has a specific street or neighborhood known for its street food, and a visit to these areas is often the safest and best way to enjoy street food in China.