Confused over whether to splash out on fine dining, or save the cash & opt for street food in Shanghai? CHI helps you decide! 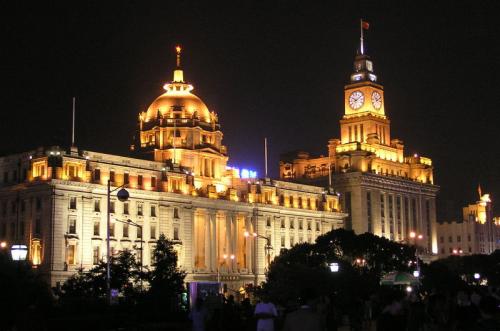 When it comes to dining options, Shanghai is truly a city of contrasts. From fancy restaurants where a meal costs as much as the city’s average monthly salary, to simple hole-in-the-wall dumpling joints with a line that snakes around the block: there are literally thousands of dining options to suit every taste and budget. These different eating options are worlds apart in terms of cost and atmosphere, but that’s not to say one is better than the other. Here, we size up some of the options in our fun, head to head battle of fine dining versus street food in Shanghai.

The Art of Al Fresco

Street food in its purest form is exactly what the name suggests; fast food cooked at temporary stands and consumed on the street. Each morning in Shanghai, the streets are alive with workers hurrying purposefully to work, while the air is heavy with wafting scents from vendors strategically placed at intersections and selling baozi (jumbo pork buns), guo tie (pot sticker dumplings), cong you bing and jian bing (breakfast pancakes), baked sweet potatoes, cifan (fried, stuffed rice balls) and other deep fried deliciousness. Fresh, piping hot and incredibly cheap, these stands provide the ultimate on-the-go convenience.

Later, towards lunch time, these street vendors will be joined by hole-in-the-wall operators laying out plastic tables and chairs for a more leisurely paced lunch featuring noodles, soup and rice in some form. Evening time is for food streets – entire streets given over to the pleasure of food, allowing revelers to stroll and enjoy the atmosphere of excitement over what to choose. Culinary delights from earlier in the day will still  be on offer, but evening is also BBQ time. Shao kao vendors line up to offer kebabs featuring vegetables, oysters, squid, oysters, beef, pork and particularly lamb, usually cooked by Uygur vendors from the northwest of China.

For tourists, walking these streets can lead to unexpected finds – stinky tofu and pungent fishy offerings are acquired smells, but both taste delicious. The somewhat rustic preparation areas can also leave newcomers a little wide eyed with concern, but food is well-cooked and thousands of locals can’t be wrong. After a night out on the town, these street food stalls are the place to grab a midnight snack that will hopefully soak up a little of the booze. Some notable food streets are Wulumuqi Lu, Fangbang Lu and Yunan Lu (and neighboring Huanghe Lu).

Fine dining doesn’t fit the street food model, but it’s still possible to feel the breeze in your hair while enjoying a meal in more refined surroundings. In fact, Shanghai has some spectacular venues with outside dining options, the Bund winning out as top spot in every sense.

You’ll have to be quick to secure one of the few outdoor tables at the Mr. and Mrs. Bund – Modern Eatery by Paul Pairet, while old favorite M on The Bund still wows with outstanding views and great food, as does New Heights’ terrace with its smart yet relaxed vibe.

The House of Roosevelt Sky Restaurant recently won an award for restaurant with the best view in Shanghai. Situated in a gracious neo classical 1920s building, this Bund-facing beauty has two terraces, and yes, the owner really can claim to be a direct-line descendant of two former U.S. Presidents of the same name.

Xibo doesn’t boast such lofty credentials or view, but its upscale take on Xinjiang food is made all the more delightful when eaten on the charming rooftop terrace hidden away on the third floor of a food court. Or if terra firma is more appealing, consider the garden setting of a restored, colonial villa such as that of Japanese restaurant Shari Shanghai, or the exquisite surroundings of Yong Fu Elite.

All these venues deliver a refined al fresco experience, but they won’t necessarily come imbued with the eclectic buzz of a food street. For that reason it’s hard to beat Xintiandi for a tourist-friendly, fun-packed melee of smart dining and bar hopping till the wee hours. Whether enjoying barbecued oysters and beer at Fangbang Lu, or fancy imported foods washed down with champagne overlooking the Bund, there’s arguably a time and a place for each. That’s why we think it’s too tight a call for an outright winner in the al fresco category, and so, a draw it is.

Dumplings – Soul Food of the East

Whether it’s the soft, soupy heaven that is xiao long bao, or the crispy and doughy contrast of sheng jian bao, there comes a time when we all crave dumplings. The debate over Shanghai’s best dumplings is as old as the stars, and has given rise to a kind of dumpling snobbery that divides and derides in equal measure. For tourists – and according to tripadviser – the hands down favorite for fried dumplings is still Yang’s. Locals and old China hands may beg to differ, however, with the establishments of Bu Cuo, Sheng Jian Wang, Zheng Yi Feng, Fu Chun, Da Hu Chun and Xiao Xian Sheng jian touted as superior.

Given the lines at all of the aforementioned dumpling restaurants, any distinction between them is probably a moot point because they’re all rather good and the wait only makes the reward all the sweeter. The ritual of anticipation, the mounting hunger, that first exquisite bite into juicy, blistering filling - and inevitable spillage - is what it’s all about. If dumplings are the soul food of the East then surely their spiritual home is found within simple shops and stands.

But what if you’re craving something a little more sophisticated? A hole-in- the-wall style eatery may appeal to your budget, but the rustic surroundings may prove less than favorable for some tastes, and sometimes you just need a few creature comforts along with that hearty sustenance.

While not exactly fine dining, Din Tai Fung reigns supreme as the best tourist-friendly spot for xiao long bao, and deservedly so. Consistently excellent, with spotless kitchens and a relaxed vibe, Din Tai Fung ticks all the boxes and you can be assured that the kitchen does not use MSG. Crystal Jade is another stalwart of the upscale dumpling scene, and Shanghai Tang has their own refined take on dim sum and xiao long bao.

But as good as these restaurants may be, a dumpling is a dumpling. There’s something inherently primal and joyously messy about eating one that requires no ceremony and, for that reason the no frills approach probably wins the day in this round.

East or West - Confused Over Fusion?

Sometimes you want something a little different; a bit of East and West. But when it comes to Chinese cuisine, experimentation isn’t an entirely welcome concept in such a foodie city. Innovation and a rarified atmosphere won’t necessarily cut it with a crowd used to great food at affordable prices. Authenticity and freshness often times win out over haute cuisine, and conviviality tends to overrule fancy - and fussy - interior design. The adage “if it ain’t broke don’t fix it” springs to mind. It’s a sensibility that is compounded by the tendency of some restauranteurs to repackage Chinese cuisine into a watered down imitation of the real thing, with inflated prices to boot.

Fusion dining is a much-maligned concept at best, and so easy to get wrong at every level, but budget fusion dining can be particularly tricky on the palate. It takes a skilled hand to get it just right. And just as there’s a time and a place for home style cooking, occasionally, it doesn’t hurt to push the boat out, dress up and be wowed by the setting as much as the food. Restaurants such as Whampoa Club, Twelve at Hengshan, Yin Par le Garcon Chinois, and y2c2 have all infused traditional elements with an upscale, designer ambience; each presenting a subtle twist on traditional Chinese cuisine.

The current darling of critics and regular folks is Fu 1088. Set in a beautifully restored 1930s villa in the French Concession, it applies a light-handed approach to the foreign elements, resulting in a subtle take on fusion that won’t alienate purists.

Top quality ingredients, attention to detail and a sense of occasion mark these restaurants out as a compelling reason to try something a little different, and that’s why in this category, we think fine dining is probably the way to go.

Whether you opt to go upscale at a destination restaurant, or keep it real on one of the many food streets, Shanghai is a foodie paradise that’s bound to tickle your taste buds one way or another; and if you want to mix it up a little, there’s no rule saying you can’t bring a little glamor to the queue at Yang’s in your favorite Louboutins.