Nestled just to the west of China lies a land of mountainous peaks, ancient traditions and some of the most rugged and uncompromising conditions on Earth. We take a look at Tibet and how to best spend a handful of days in this amazing place. 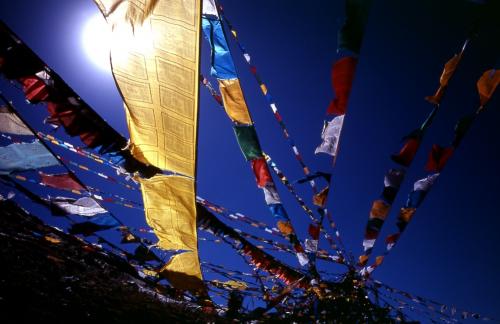 A country of spectacular natural scenery, Tibet has been referred to as the ‘roof of the world,' boasting expansive plateaus of snowy scenery, awe inspiring mountainous peaks, ancient religious structures and a rich and storied history. A mysterious and exotic place for many outsiders, Tibet has exerted a unique draw for many travellers and remains one of the most rugged and untamed places on earth.

It is worth noting that non-Chinese nationals are required to obtain a special visitors permit in addition to securing the services of a local guide for each day they are in Tibet. This rule is vigorously enforced, so be sure to organize these particulars in advance of your trip. Visas can be arranged through a travel agent in your country or through a Chinese, Nepalese or Tibetan travel agency. They vary in price according to how quickly you’d like your visa processed. A visa that will be returned to you over five days will cost $50, whilst an expedited overnight visa will cost around $85.

The capital city of Tibet, Lhasa is by far the easiest point of entry into the country; however, at a staggering 3,200 metres above sea level, it presents some unique issues as to the best means of entry.

Visitors can fly into Lhasa from Beijing, Shanghai, Chengdu, Guangzhou, Kunming and other major Chinese cities as well as from Katmandu, Nepal. Lhasa has been known to cause issues for many travellers arriving from sea level due to not having sufficient time to acclimatize to the height. It is recommended that people allow up to three days to allow for their bodies to adjust to the height to avoid altitude sickness and its associated (and potentially fatal) conditions.

Since the construction of The Qinghai-Tibet Railway in 2006, visitors to Tibet can catch a train directly from Beijing to Lhasa with the journey taking a little over 40 hours, or from Shanghai where the journey time is around 48 hours. Prices begin at 390 yuan for a hard seat up to 1,300 for a sleeper, and the conditions are not what many would consider luxurious. Nonetheless, catching the train offers a dual benefit in that it offers unique means to view the spectacular scenery of each country whilst gradually adjusting to the altitude, alleviating the shock to the body that arriving by plane often presents.

Residing deep within the Himalayan mountain range, Lhasa is the perfect launch point for your Tibetan adventures. The historical home of Tibetan Buddhism, Lhasa is home to a wealth of ancient Buddhist relics and structures.

Since the 7th century the Jokhang Temple has played host to successive waves of awestruck pilgrims prostrating themselves outside its impressive walls. Indeed, for most Tibetans, the Jokhang Temple is the most sacred and important temple in all of Tibet, and the spiritual centre for the country. Situated in the middle of old town Lhasa, entry costs around 75 yuan and remains a must see destination for any visitors to Tibet.

Known for its grand construction, ornate buildings, exquisite artworks and religious atmosphere, this impressive 13 storey palace built into the side a mountainous face is considered to be a model of Tibetan architecture. Now the home to the Dalai Lama and the remains of previous Dalai Lamas, this incredible structure will leave you breathless. Only 2,300 tickets are made available each day, so be sure to get in line early to view this spectacular monument. Admission varies according to the time of the year (100 yuan November - April, 200 yuan May - October).

Built in the 1740s by Qing magistrate, Norbulingka Park is the biggest man made garden in the Tibet Autonomous Region and the “summer palace” of the Dalai Lama. The grounds have an area of around 360,000 square metres, while the main palace includes a staggering 374 rooms. Entry is priced at 70 yuan.

Longer than the more famous Grand Canyon in Nevada, the Yarlung Zangbo Grand Canyon is regarded by some as the deepest canyon in the world. Starting at Mount Kailash before reaching the juncture of Mainling and Medog counties, the Yarlung Zangbo canyon is home to an impressive array of native animals and plants, many of which have survived and prospered almost completely devoid of human contact and influence. Admission varies from 75 yuan (October - April) to 150 yuan (May - September).

Constructed in the 8th century, Samye Monastery was the first Buddhist monastery established in Tibet and is laid out in the shape of a giant mandala. Over centuries, many Buddhists have come on pilgrimage to Samye, some taking weeks to arrive at the destination. Entry is priced at 30 yuan per visitor.

Located more than 4,700 metres above sea level, Namtso lake translates to ‘heavenly lake’ and is renown for its high altitude and imposing scenery. The highest salt lake in the world and the second largest in China, the surface of the lake provides an incredible mirror like appearance that reflects the sky. Admission varies from 60 yuan (November - April) to 120 yuan (May - October).

One of the most interesting and rewarding parts of travelling is the exploration of different cultures through their cuisine. The harsh climate and high altitude of Tibet have led to a very distinctive menu. Just be sure to dust off your chopstick skills as a number of restaurants do not have forks, spoons or knives.

Tsampa is the staple food in Tibet and it is eaten with every meal. Made from dough consisting of roasted barley flour and ghee (clarified butter), it is eaten either with beef or mutton and vegetables, or with sugar to give it a sweet taste.

Almost the official form of protein in Tibet, yaks are bred as they are uniquely acclimatized to the alpine environment of the country. Along with mutton, yak meat is by far the most common form of meat and is enjoyed in a range of dishes.

These Tibetan dumplings are made either with meat or vegetables and then fried or steamed according to your individual preferences.