As winter draws nearer in China, many will be dreaming of a quick trip away to somewhere warm. 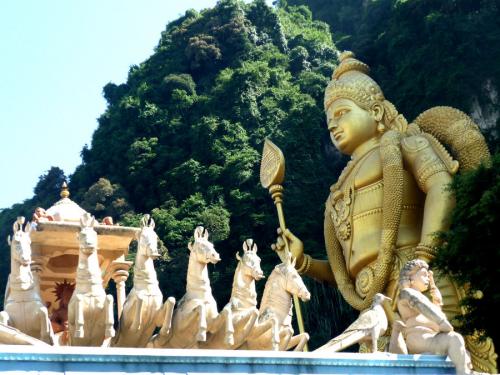 A great tropical getaway, and so close that you'll barely notice the flight: Malaysia, just five hours from Beijing, is nearby and yet a world away. The diversity of Malaysia is unique and enthralling; from its landscape of mountains, forests and ocean shores, to the variety of its many people’s cultures, languages and ethnicities. Here, we’ll explore the facts and figures as well as the culture of Malaysia and, who knows, you may be planning your next vacation before you've even finished the article.

Malaysia is a medium-sized country (the world’s 67th largest) in Southeast Asia that is split into two separate sections by the South China Sea, called Peninsular Malaysia and Malaysian Borneo (also known as West and East Malaysia). The country borders Thailand, Indonesia and Brunei. At 127,350 square miles, Malaysia has just over 28 million people living within its borders. The capital city, Kuala Lumpur, is also the largest, with over 1.5 million people. The official language of the country is Malaysian but English is a widely used second language, being the official language for teaching math and science in schools. However, these are nowhere near the only two languages in town. Over 137 languages are spoken in Malaysia, adding to the diversity of the culture.

The citizens of Malaysia constitute the 42nd highest population of any country. Of course, citizens speaking 137 languages are bound to have diverse backgrounds. Malays make up 57 percent of the population, and Chinese, Indian and Bumiputeras, along with a small percentage of other races, make up the rest. This diversity of ethnicities practice a variety of religions, with Islam being the most common, followed by Buddhism, Christianity and other religions.

For many, Malaysia has nearly perfect weather. The country sits in a tropical region, which means the weather is between about 70 and 90 degrees year-round at sea level. Higher elevations experience cooler temperatures. The humidity is usually high, with between 2,000 and 2,500 mm of rain per year, and much more precipitation in some areas. The proximity of coasts, hills, mountains, valleys and the ocean can affect the weather and temperature, as well as climate change, which can affect water levels, causing floods and droughts.

The incredibly diverse and rich environment of Malaysia is one of the major highlights of the country. Malaysia is just one of 17 countries in the world that has been classified as “megadiverse.” This means Malaysia is a place that contains a majority of the species on Earth and is very biodiverse, with a wide variation of life, such as in its plant and animal species, genetics and ecosystems. Unsurprisingly, this makes Malaysia a very interesting and varied place to visit. Mountain forests have especially unique habitation because species in the mountains are kept separated from one another by lowland forests, encouraging diversity. Animal species in Malaysia are abundant. Hundreds of species of birds, mammals, frogs, snakes, lizards, coral and fish call Malaysia home. It is also said that the waters surrounding some of Malaysia’s islands are the most biodiverse in the world. The plant life is just as diverse as the animal life in Malaysia, and actually, much more so. There are over 14,500 types of flowering plants and trees that call the peat forests, mangrove forests and rainforests home. Even the world’s largest type of flower, the Rafflesia genus which can grow over three feet in diameter, is found here.

You can't go to Malaysia and not eat, so you might as well make it worth it! Malaysia’s various cultures that make up its melting pot all add their influence to the diverse cuisine too. Jalan Alor in Kuala Lumpur is the spot to go to hit the streets and get a taste for the local food. Wait until nighttime to venture out for the full experience of the food as well as to enjoy the local culture that will gather on the city’s stoops to turn it into their dinner table. Anything from char kuey teow to BBQ chicken wings will be warming the woks of the street vendors and the bellies of hungry customers.

Going to Malaysia without experiencing the unique natural habitats would be a crime. There are countless opportunities to get out and enjoy the environment. Kinabalu Park in Sabah, a UNESCO World Heritage Site, has Malaysia’s highest peak that attracts hikers and climbers from all around that are searching for adventure and want to enjoy the view from the top. The park is also great to explore, with many diverse plant and animal species within its borders. For an outdoor experience on the opposite end of the spectrum, dive underwater for what’s been called one of the best diving spots in the world. Sipadan Island in Sabah has the world’s richest marine habitat. Check out the Hanging Gardens, Barracuda Point, Turtle Cavern and the Drop Off, an area where the ground drops off suddenly from knee-height to 600 meters deep.

Kuala Lumpur is a big city with all the amenities and is not to be missed for by city lover. The tallest twin towers in the world are here, the Petronas Twin Towers. Take a trip to the skybridge to catch the view of the city from the sky. Down below, check out Kuala Lumpur’s Chinatown to see historic buildings and shop with the locals in a cultural setting. Little India is the Indian equivalent of Chinatown, with all the curries and shopping you could want. The Central Market is another cultural landmark, done up in the Art Deco style, with shopping, crafts and more for tourists and locals alike.