UNESCO World Heritage Sites to add to the bucket list. 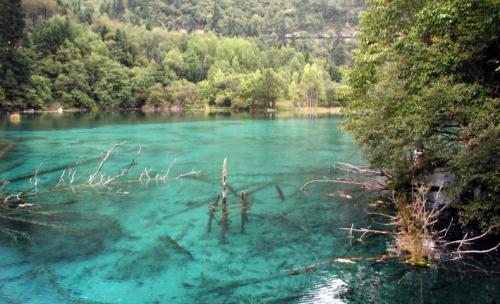 China’s natural wonders know no limits. In a country of almost 10 million square kilometres, you could spend a lifetime exploring just one of its natural reserves and still have more to see. As a visitor, it’s tough - painful even - to choose among all the riches China has to offer. Here are our top 3.

In Yunnan Province, about 3,000 sandstone peaks green with moss stretch up into the low-hanging mist and clouds, as high as 200 meters into the sky. If you’ve seen Avatar, you might be forgiven for looking around for flying horses with their blue Na’vi riders.

Welcome to Wulingyuan, the real Hallelujah Mountains. Virtually untouched by man until just 60 years ago, Wulingyuan is now a district unto itself as well as a UNESCO Natural World Heritage Site.

Inside of this spectacular natural wonder is a series of smaller but no less impressive natural wonders. Wulingyuan contains more than 40 caves, for example, one of which is said to be among the 10 largest caves in China: Huanglong or Yellow Dragon Cave.

Two natural stone bridges are also found in this area, the aptly named Xianren Qias and Tianqi Shengkang (meaning Bridge of the Immortals and Bridge Across the Sky, respectively).  At 357 meters high, they are believed to be some of the highest natural bridges in the world.

Wulingyuan is also home to many endangered species including the Asiatic Bear, the Asiatic Dog, the Chinese Giant Salamander, the Clouded Leopard and the Chinese Water Deer.

Though the area is almost entirely unpopulated by humans, a hidden village lies deep in the mountains, over 1, 000 meters up: Village in the Sky. Legend has it there was once a resistance leader who lived in this city during the time of the Ming Dynasty. The leader called himself the Son of Heaven and allegedly threw himself into the ravine 400 meters below when he lost the water.

Wulingyuan is equally beautiful in winter, when snow dusts the tops of the peaks and mist clouds the skies. It’s worth a visit in all seasons.

Another UNESCO Natural World Heritage Site, this area is made of of 15 protected areas in the mountainous northwest part of Yunnan Province. It is one of the richest regions in the world in terms of natural biodiversity, and possibly the most biologically diverse place on earth.

Three deep gorges run parallel along the Yangtze, Mekong and Salween rivers, the most travelled of which is probably Tiger Leaping Gorge on the Yangtze. At 16 km long and 4 km deep, this gorge is the deepest in the world. It is also one of the best known and best loved hiking spots in China.

The “high road” hiking path runs the length of the gorge and is regularly used by the local Naxi people. Though often made impassable during the rainy season, the high road is still hugely popular with hikers and lined with guesthouses. Most of these houses are unheated -- something else to keep in mind for those considering doing the hike during the rainy season.

The “low road” below is slightly shorter but often made impassable by rock slides and waterfalls. Serious hikers take the high road to avoid all the bus traffic and kitschy shops on the low road.

The gorge itself is not considered navigable; many have died trying to disprove this. Still, this time of year is great for a visit, as the hills are just coming alive with flowers and plant life.

Jiuzhaigou is a national park and nature reserve with over 100 lakes, many with the cool turquoise hue the area is famous for. The waters flow through forests and down waterfalls and into larger, even more beautiful lakes so transparent you can see reflection of ripples on the bottom of the lake.

The Jiuzhaigou Valley was formed by the advance and retreat of glaciers over millions of years, which eroded the mountain and left deposits of earth and rock. Being at one time the bottom of the ocean, the lakes and waterways contain a high concentration of calcium carbonate, which makes the water as clear as glass and allows for the shocking turquoise hue of the lakes.

Though the area was little known until about 1975, it is now a protected place with its very own airport, tucked in the mountain at 3,500 meters above sea level. The airport was built in 2002 to give easier access to growing populations of tourists from nearby cities. Flying over snow-capped mountains and into the valley is an experience in and of itself.

In the 1990s the area was made a UNESCO World Heritage Site and World Biosphere Reserve. Located along the northern border of Sichuan Province, the fairytale world of Jiuzhaigou Valley is home to around 112 Tibetan and Qiang families. The name translates to “Valley of the Nine Villages” for the nine villages spread around the area, which all together boast a population of about 1,000 people.

All nearby hotels are built outside the valley and no busses or cars are allowed inside the park. The scenery is breathtaking in all seasons, and merits at least four visits to see the area in all its glory. If only one visit can be managed, most agree October is the best time to see Jiuzhaigou.

At an average altitude of 3,000 meters, temperatures can vary greatly between day and night. Bring two coats, or at least a lot of layers to accommodate for the shifting temperatures. Avoid drinking alcohol, which can do some damage at this altitude.