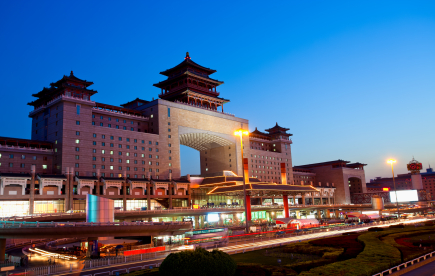 With its historic imperial splendor and rapid modernization, Beijing is truly a marvel. As China takes a greater role on the world stage, Beijing’s status continues to rise.

The construction of modern infrastructure, hotels, and high rises peaked in the run-up to the 2008 Olympics, but growth continues apace.

Beijing boasts several “must-see” destinations, including the legendary Forbidden City, the Summer Palace, Lama Temple, and of course, the Great Wall of China. With the exception of the Great Wall, these are all now accessible by Beijing’s gleaming new subway system. This is the most affordable way to get around the city, with the added benefit of avoiding Beijing’s snarling traffic jams.

Visiting the Great Wall of China is a childhood dream come true for many international travelers. Built over several centuries to repel Mongolian invaders, it is probably more accurately described as the Great WALLS of China. Nearest to Beijing are the Badaling and Juyongguan sections – these are often very crowded and are not recommended unless your time in Beijing is limited, or health limitations don’t allow for much climbing.

It’s much more interesting to venture further afield and see the less restored parts of the wall (and avoid crowds). Those interested in extreme adventure can even participate in the Great Wall Marathon, held every spring. On the other hand, those interested in some serious R&R may wish to book rooms at The Schoolhouse, a converted guesthouse and B&B near the Wall with a chilled out bohemian vibe.

Within the city limits, the best way to explore the city is by bicycle. Although automobiles have long surpassed two-wheelers as the preferred mode of transport, suffocating traffic jams can make driving a difficult proposition. Wheeling around the old “hutong” neighborhoods near the Lama temple (and the Russian Embassy) can provide a rewarding peek at life in Beijing a century ago.

Beijing is a gourmand’s delight. As the capital city, Beijing has restaurants representing delicacies from across the country. While traditional northeastern local cuisine will appeal to the “meat and potatoes” man, the provincial offices located in Beijing serve as a window to the various tastes of China.

Beijing Airport added a third terminal ahead of the 2008 Olympics, and it is a beautifully designed building. And it is VERY big, so give yourself plenty of time for connecting flights. Travelers from Shanghai are increasingly taking the high-speed rail, which takes about five hours and is subject to fewer delays than flying.

Of course in Beijing, or anywhere else, what matters most is protecting your health. The city’s air quality has gotten notoriously bad, and schoolchildren and the elderly are advised to remain indoors when things get particularly smoggy. While the local health care system leaves something to be desired, there are several international hospitals in the city which cater to expatriates. However, these can be expensive. Be sure that your international travel health insurance is up to date. A China Health Insurance advisor can tell you more. Feel free to contact us with any questions.

For more information about international health insurance plans for China, or to receive a free quote, please contact our team today.

Visit us
in
Hong Kong