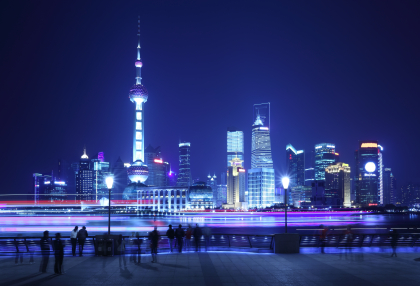 Located on the Yangtze River Delta, Shanghai has emerged as a world-class destination following China’s opening and reform from the 1980s. The former marshlands of Lujiazui in Pudong, east of the Huangpu River, are now home to the highest concentration of skyscrapers in the world.

Shanghai Tower, stated to be completed in 2015, will rise 632 meters in the air, dwarfing the adjacent Jinmao Tower and Shanghai World Financial Center buildings – which are a relatively modest 420 and 492 meters, respectively!

Like many port cities, Shanghai has an interesting and checkered past. In the wake of the 19th century Opium Wars, Shanghai became one of the treaty ports and large swathes of the city were subject to foreign occupation. The foreign occupied territories were known as “concessions” and were best known for being a haven for gangsters and libertines.

Tales of “Big-eared Du” who was both the police chief and leading warlord of Shanghai, rivaled that of his counterparts in Capone-era Chicago, and his legacy continues to this day. In fact, the Mansion Hotel on Xinle Road in Xuhui District (the former French concession) is one of Du’s old residences.

The “Concession” era overlapped with the Japanese occupation of Shanghai and the outbreak of the Second World War. Shanghai’s Hankou District became a refuge for stateless Jews and other refugees, as Shanghai’s concessions did not require a passport for entry. Their legacy persists to the present day, with the synagogues and museums in this old Shanghai neighborhood, which is currently experiencing a wave of revitalization.

While sightseeing opportunities in Shanghai are limited compared with the grandeur of Beijing, there are many points of interest in the “Pearl of the Orient.” Upon arrival to Pudong International Airport, take the Maglev train to Longyang Station. At a maximum speed of 431 km/h, it’s a quick trip!

From Longyang Station, take Shanghai Metro Line 2 to Lujiazui. Shanghai’s metro system has expanded dramatically in the past decade, and now has a claim to being the largest subway system in the world – and still growing. Also, now that China has become the world’s largest auto market, the subway is a great way to avoid traffic.

From underground to far aboveground: Lujiazui is vying with Hong Kong as a global financial services capital. Take your pick among the high rise skyscrapers in the area (or even the Oriental Pearl Tower), jump on the express elevator and take in the view. Well, as long as the air quality’s good enough. Tip – the view of Shanghai is much better at night when the city below is lit up. Also, save a little cash and get a cup of coffee at the hotel restaurant, rather than shelling out the extra cash for the view from the observation deck.

Now that you’ve seen Shanghai’s future, it’s a quick jaunt across the river to see Shanghai’s past. Take a ferry across the Huangpu, or the very bizarre Bund Sightseeing Tunnel (or the subway if you’ve hung on to your transport card that you bought at Longyang Station).

The Bund (pronounced to rhyme with “fund”) or “waitan” in Chinese, is a fascinating look at Shanghai’s past. Here it should be noted that “bund” comes from a Persian word for “embankment” – it’s not the German word pronounced like “boond.” The Italianate style buildings on the embankment of the Huangpu River formerly housed a number of Asian banks and custom houses. Today, some of these have been reclaimed by Chinese financial services firms, but mostly they house purveyors of international luxury goods and nightclubs for the jet-set!

Heading west from the Bund, those with a high tolerance for crowds may visit Yu Gardens. This attraction has captured the essence of pre-Concession era Old Shanghai. Unfortunately, there’s a lot of cheap schlock on offer, but interesting architecture and culinary delights can make up for this. Be sure to try Shanghai’s most famous dish here, soup dumplings or “xiaolongbao.”

Those of a sartorial bent will head south from here to the South Bund Spinning Fabric Market on Lujiabang Road. This is where you go to get your high street and catwalk fashions copied at a fraction of the price, and custom fit to boot! Be prepared to negotiate, and avoid the weekend crowds if possible.

Now suited and booted, head over to People’s Square. During the Concession era, this was a local racetrack. However, gambling is illegal in Mainland China and there was no time for bourgeois pursuits like horse racing in the early days of the People’s Republic, so the area was converted into a park. The old Shanghai Racing Club is now Kathleen’s 5 restaurant, which is adjacent to the Shanghai Museum of Contemporary Art.

Also in People’s Square is the Shanghai Art Museum, chock full of ancient artifacts, and the Urban Planning Museum, which shows the development plans for the future. However, the most interesting part of the park might be the matchmakers’ corner, where parents and grandparents attempt to marry off their offspring.

A brief side note on Shanghai’s burgeoning arts scene: the municipal authorities are investing heavily in the arts with plans for dozens of new galleries throughout the city. The Rockbund Art Museum always has provocative installations, and the China Art Museum in the old Expo Pavilion in Pudong is quite grand. The Shanghai Power Station Art Gallery (inspired by London’s Tate Modern) will also appeal to the culture vultures. Smaller independent galleries litter the former French Concession and Hangkou District, and there are also the famous M50 galleries at Moganshan Lu.

After all this touring around you will certainly want to put your feet up and have a breath of fresh air and Shanghai’s old French Concession is just the place. Old villas and tree lined streets play host to chic restaurants and cafes and stylishly cosmopolitan denizens. Don’t miss Yongfoo Elite, on the site of an old consulate, for a sense of the vibe in Shanghai a century ago.

Perhaps the most efficient way to tour around Shanghai is by motorcycle sidecar – there is a French-owned company which can whiz you around the city quickly, with tours customized to your interests. The former French concession can best be toured on foot or by bicycle, although this may be unpleasant in the hot summer months. There is also a London-style open-top tour bus which circumnavigates the city. Taxicabs are cheap, but traffic jams are very common in the center of town.

Shanghai is in many ways a modern global city, but its road to progress has been uneven. While the city’s gleaming new buildings stand as monuments to the country’s new wealth, China is still in many ways a developing country. The standard of local health care is very low, and most expatriates and wealthy Chinese avoid local hospitals, where staff are underpaid and hygiene is not up to par.

Shanghai does have a number of international hospitals, but these can be expensive, with fees resembling those in developed western countries. International travel and health insurance is strongly recommended. The China Health Insurance team is here to help you with any health insurance queries.

For a free, no-obligation quote, please contact one of our staff members today. We look forward to hearing from you.

To learn more about the Shanghai medical system, or health insurance in Shanghai, please click here .

Read the latest Blog articles
Go to the Blog
Tweet

Read more about our insurers